Every year, Tamu Dhee Nepal hosts a week of programmes to celebrate the festive occasion of Lhochhar/Lhosar. Among the many events that are held during the week to mark the year of the bird (Chya Lhochhar/Lhosar), the most popular event is the open road race competition which was sponsored by Tamu Samaj UK this year. 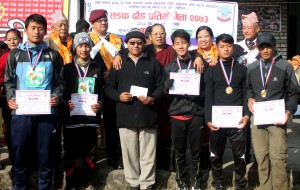 The 10 Kilometre distance open road race competition winner was Rajendra Neupane from Sankhuwasava, who completed the race in 32 minutes and 36 seconds. Second place was awarded to Mr Kiran Sing Bogati from Kailali with a race time of 32 minutes and 58 seconds and third place went to Mr Bikram Bhujel from Chorepatan, Pokhara with a completion time of 33 minutes and 16 seconds.

The 10 Kilometre distance race event was started from Pokhara Nayabajar and ended at Tamu Dhee Nepal’s office compound. The race route went through several well recognised locations such as Lhakhan Chok Airport, Mustang chok, Tamu Hula chok, Sirjana chok, new road, B P chok chiple dhunga, Bhimsen chok Mahendra pul and Naya Bajar. The route for the 5 Kilometre race started and ended at the same place as the 10 Kilometre event but was along a shorter route.

This popular event was started by Chief guest SP Ghanashyam Aryal (Kashki District Police Chief). His opening speech highlighted Tamu Dhee Nepal as an established organisation that has provided many contributions to the Nation. He later goes on to congratulate all the prize winners and thanks Tamu Samaj UK for sponsoring the race events.

The programme was chaired by Tamu Dhee Nepal’s Chairperson while the co-ordination of the event was handled by Mr. Giri Prasad Tamu (General Secretary. Special thanks to Mechi Special CTC Tea who provided t-shirts and  tea as well as Mrs Karma Gurung (Chairperson for Tamu Dhee Nepal) who sponsored the buffet for the event. 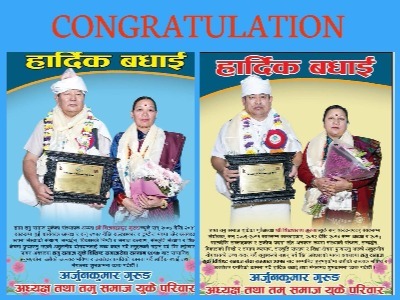